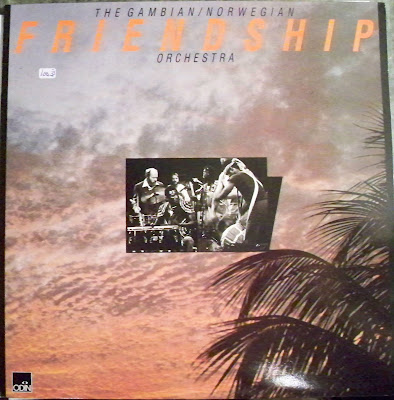 I love when fusions of jazz and world music work. There is a multitude of varied mash ups with varying effectiveness. The most successful seem to be those of cultures that rely heavily on improvisation and/or rhythmic devices, Indian and African music being the most prevalent. Personally, I find that I gravitate toward the music of the South African expats (most notably Abdullah Ibrahim, Chris McGregor, Johnny Dyani, and co.). The blend of kwela and jazz has a particularly celebratory and lively feel, which is easy to love.

That being said, I’m always open to other attempts to see if they are up to snuff. Seems that the Europeans have always been more willing to bridge the divide between cultures, especially Scandinavians. While in Norway last month, I came across this record at a cool record shop in Bergen called Samleren (wrote about it here). I’ll admit that I was a little hesitant as the early 80s were awkward years for jazz and world music. Overall, I think that this mixture of Gambian folk/drum music and European jazz works pretty well.

Norway has been a jazz loving nation ever since the music hit the European shores. Norwegian jazz musicians realized the importance of unity within their ranks early on, developing the Norsk Jazzforbund (Norwegian Jazz Foundation) in 1953 as a means to promote Norwegian jazz and creative music artists in Norway and beyond its borders. In 1980, the Jazzforbund began to receive national funding that allowed them to create a Norwegian Jazz Archive and Odin Records in 1981.

Odin was created to feature and publish the work of Norwegian jazz musicians. It was the first such label in Norway and released some great, eclectic recordings during its 13-year existence. Early releases included musicians that have since become well known through associations with creative music giant ECM, including Jon Balke, Nils Petter Molvaer and Arild Andersen. (Most of the releases can be found on CD or for digital download at www.curlinglegs.no.)

The Gambian/Norwegian Friendship Orchestra was created in 1982 under the guidance of Bergen based pianist/bandleader Knut Kristiansen and Gambian vocalist/percussionist Zahir Helge Linaae. Kristiansen had been deeply involved in the Bergen jazz scene for some time. He led a number of ensembles including the Bergen Big Band. In 1981, the Wollof Music Ensemble performed at the Voss Jazz Festival where Kristiansen met Linaae, a leading member of the ensemble. 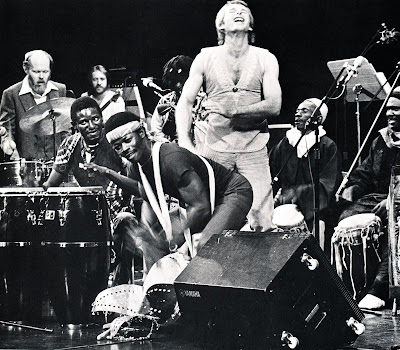 A beardy Kristiansen on timbales and Linaae getting down in front

In 1982, Kristiansen and Linaae embarked on a study trip to Gambia. There, the two traveled the country and recorded music that would be transcribed for the ensemble. In addition, some music was transcribed from other sources, including recordings made by British ethnographers in the 1940s and 1950s of Ghanaian Ewe music. The resulting collaboration used elements of the Wolof (the largest ethnic group of Senegal) and Mandinka (the largest ethnic group in Western Africa) folkloric music.

The G/NFO was organized at the suggestion of the president of the Norsk Jazzforbund, Rolf Grundesen, who then scheduled the group to perform at the 1982 Bergen Jazz Festival. With the help of the Norwegian Cultural Council, The Fund for Performing Artists and the Association of Norwegian Song and Music Organizations, the G/NFO was able to meet at Bergen’s Grieghallen on October 2, 1982 on the 10th anniversary of the Bergen Jazz Forum (the city’s largest jazz club/presenter). 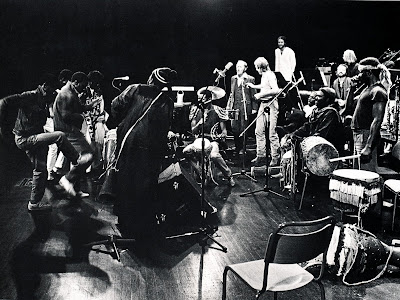 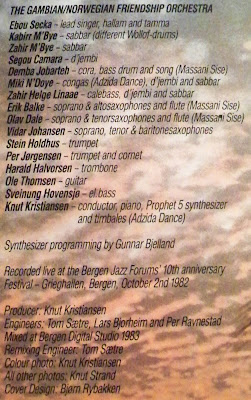 “Prayers (Songs of Daru Rilwan)” is based on Kristiansen’s account of and subsequent recording of a Muslim New Year celebration at a Mosque in Daru Rilwan, Gambia. The music echoes the chants and singing of the ceremony. There is a definite Middle Eastern feeling as the piece remains in a minor key and the ensemble remains staid and reverential throughout the theistic sounding piece. Soprano sax emulates the musette tone and the collective horns repeat a minor motif. The piece is mostly written with only a bit of improvised trombone near the end from Harald Halvorsen. The horns build toward a rhythm section climax. 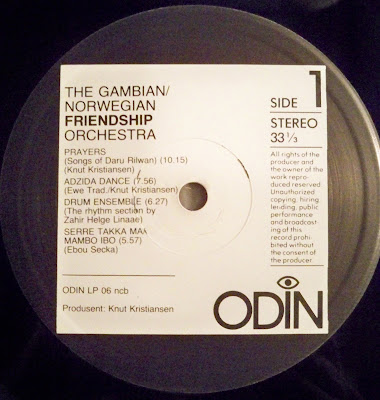 Transcriptions of music from the Ghanaian Ewe tribe are the basis for “Adzida Dance.” The original recordings are from the British musicologist Arthur Morris Jones ‘s collection. The somber tenor sax of Olav Dale briefly states the theme before horns and percussion set a dancing pace. The horns play the melody in unison with exclamations similar to that of the “hot jazz” orchestras of the 20s and 30s. This is a tenor feature with some very expressive playing from Dale as the percussion ensemble exerts energy. There is a “jazzy” interlude as the percussionists shift into a more swing rhythm along with a more traditional harmony as Dale keeps veering more out. Then back into the thick of percussion. The tamma (talking drum) holds the focus as master percussionist Ebou Secka takes off over a percussion vamp. This is a varied yet impressive and energetic performance.

“Drum Ensemble” features only the percussion ensemble. The drum choir displays a mastery of multi-rhythmic interaction in two different African drum traditions, Wolof and Mandinka. Mandinka djembe (a midsized, wooden drum played by hand and made from the Lenge tree) drumming is featured first, performed by master drummer Segou Camara with accompaniment by Miki N’Doye, Linaae and Demba Jobarteh. This intensely driving section has a strong established pattern with the interwoven djembe interjections thrown in by Camara. The Wolof section seems a bit less structured, or more obliquely structured, as the drums seem to all play differing parts. This section also features twins Kabirr and Zahir M’Bye playing in tandem. Pretty amazing display by all.

Vocals are present in the danceable “Serre Takka Ma/Mambo Ibo.” The title is said to mean “darling, marry me” and the song has a very rustic quality. Ebou Secka’s halam (small, 5-string lute) and vocals are front and center. The percussion builds up intensity until horns and piano come in with a salsa flavor. The Wolof drumming lends itself well to the sounds of Afro-Cuban inspired jazz, the reason the band switches gears. Stein Holdhus takes a nice trumpet solo, which is followed by a piano solo by Kristiansen. This is a crowd pleaser for sure, but maybe not an authentic or successful blend between the two cultures.

“Haleli Etoile” is named after the Senegalese band Etoile de Dakar that was formed by Youssou N’Dour in 1979, and was extremely popular in the region, including Gambia. The group blends native percussion and performance practice with those of modern pop (no drum kit, only native percussion). The Etoile de Dakar’s popularity meant that Kristiansen heard the music frequently while in Gambia. He arranges this piece for the ensemble keeping the ostinato rhythm patterns, making the dance tune infectious. The melody is catchy like the best pop tunes. Per Jørgensen’s great, improvised cornet intro leads into the ensemble melody with Erik Balke’s alto acting as the lead vocalist with a choir of other horns. Balke sounds reminiscent of David Sanborn on this one. Not a bad thing. Vidar Johansen has the final solo on tenor. This is probably the strongest ensemble performance on the record. 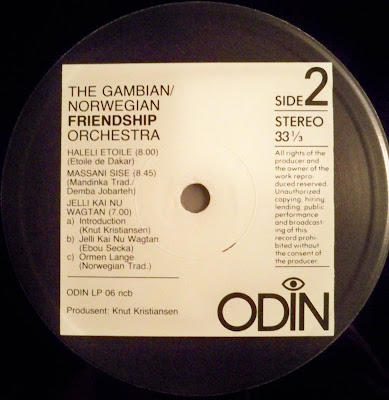 Jali Demba Jobarteh’s kora is featured at the beginning of “Massani Sise,” a Mandinka folk song. The lovely lute playing is accompanied by the percussion ensemble, a very authentic performance of this piece. Demba’s vocals are resonant against the sparse accompaniment. The percussion starts to pick up as the guitar and bass come in. The horns begin a repeating motif that emulates the arpeggiated kora lines. There is a little of that slick 80s electric bass and guitar sound (I’m hearing the echoes of Sharrock’s Enemy Records stuff, dunno), though the solos aren’t bad at all. Vidar Johansen takes a soprano sax solo as the ensemble picks up intensity toward heroic climax.

The Wolof title of “Jelli Kai Nu Wagtan” expresses a sentiment that music no longer finds itself bound by isolation and tradition, instead it continues to mix with other traditions to make new music. This piece is in three parts and blends two separate musical traditions: the African and European. The introduction uses a medieval musical cadence, the Landini cadence (basically a Major 6th cadence used in medieval choir music). It is easy to hear. Seems as though lots of European musicians use these medieval musical devices (e.g. Surman, Garbarek, etc.). Soprano and tenor sax add a little color to a pretty tight harmonic sequence, which is pretty but not very inspired. Musical sign of the times? The second section is based on the Wolof music tradition and comes in immediately after the horns stop. The percussion and vocals are seemingly loose but become more and more focused. Much more enthusiastic. The drums then slow as the horns return for the concluding section, a playing of “Ormen Lange,” a Norwegian folk tune with close harmony and a catchy melody. Kind of a grab bag of ideas but not bad. 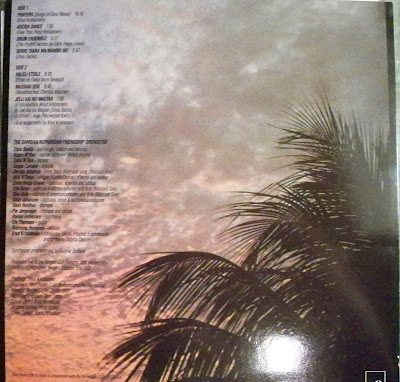 G/NFO played this and a number of other gigs in Norway, including a nationally televised broadcast. Odin Records released the self-titled recording in 1983, which even had limited distribution in the States (though I’ve never seen a copy here). I couldn’t find any evidence that the group lasted any longer than that year.

Kristiansen was awarded the Norsk Jazzforbund’s Buddy Award in 1983 for his efforts in jazz and world music. He has maintained a steady career in Norway, but by no means prolific. His few recordings have been mostly tributes to Thelonious Monk.

Percussionist Miki N’Doye released a record similar to that of the G/NFO called Joko (ACT, 2002). He has also been a part of pianist Jon Balke’s Batagraf ensemble that has used elements of Western African music and has a couple of records out on ECM.