Two weeks back, I went on a trip to Norway with my father. We were visiting the land of our forefathers and celebrating our birthdays, 30 and 60 respectively. Yeah, yeah… I copped the idea from a Visa commercial from a few years back. Don’t worry, though. We were able to maintain our Norwegian heritage unlike the unfortunate Swedes of commercial fame, though a hotel clerk mentioned that our last name was “almost” Norwegian (we’re missing a K before the J, evidently). 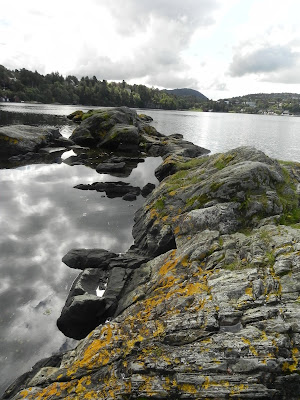 Anyhow… A trip wouldn’t be complete without at least an attempt at record perusal. I was able to track down the last record shop in Bergen and a mighty Oslo record haven.

The pearl of Norway. What a beautiful city. We hiked up mountains, ate reindeer sausage and scoffed at the prices of miniature troll statues. We came across a random junk shop that had some records but the good stuff was “not priced yet.” We also came across a CD/DVD/video game chain that had a fairly wide selection but outrageous prices. 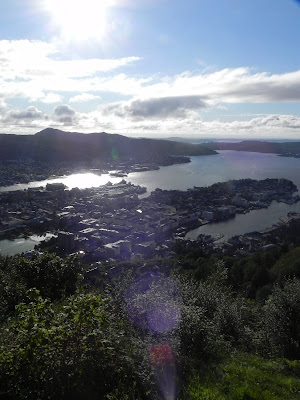 Norway was an expensive place. After discovering that prices of CDs are on average around NOK 189 or roughly $36 (CDs are a petroleum product, after all), I didn’t think that I’d find collectable vinyl at decent prices. I was pleasantly surprised, however. I had to ask around if there was a record store and a used bookseller hipped us to Samleren. 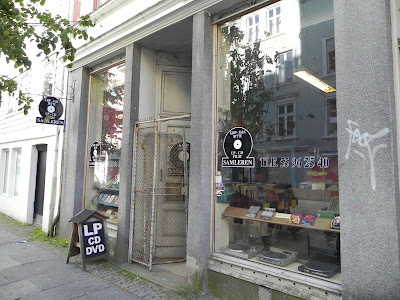 Samleren translated to English would be “collector.” The shop was a small one filled with used records, CDs and DVDs. The collection was separated into three rooms. The first was dedicated to vinyl, a large collection of rock with some jazz, world and hip-hop. The second room held their used CD offerings along with metal and Scandinavian vinyl sections. The last room held the Norwegian vinyl selection and DVDs. 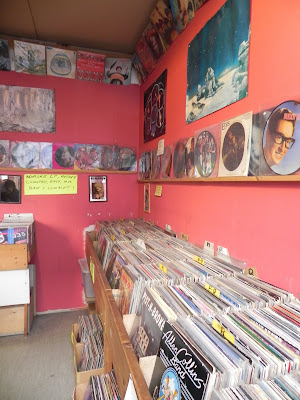 Samleren was a fun store to shop. The vinyl exclusive room had many releases you’d expect to find in a well curated rock shop. The exceptional selections were to be had in the specialized rooms. The Scandinavian sections were fun to rifle through. They were separated into Swedish, Danish and Finnish. I didn’t have a clue who any of the artists/bands were, aside from Abba. It would have been fun to go through with a fine-tooth comb and listen to a bunch to see what was interesting. There was no listening station but the extremely friendly proprietor was happy to let me listen to some selections. 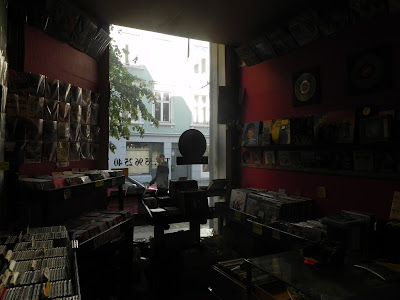 The Norwegian selection was huge, especially in the folk. I steered toward the Norwegian jazz/jazz-rock section since I was more familiar. I was able to find a handful of nice things on the ODIN label that I hadn’t seen before. 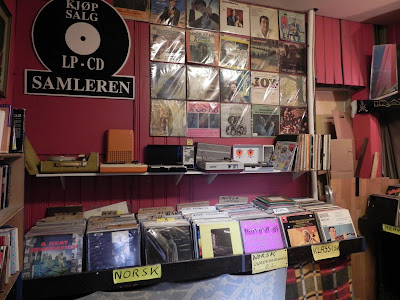 Our helpful host (I forgot to get his name) was full of random info. I asked him for recommendations in Norwegian rock and new wave to which he responded that Norwegian music was sub par compared to Danish and Swedish, except for the folk music (Norwegian folk was far superior). The production value was apparently higher in Sweden and Denmark. He wasn’t able to help with jazz recommendations but asked a local shopper to point the way. Jan Garbarek, naturally. 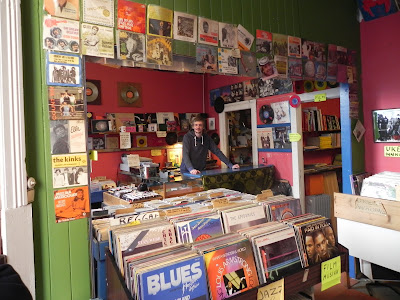 We were also privy to a history lesson. Believe it or not, Leiv Eiriksson (famed Viking explorer, son of Bergen native Erik the Red and first European discoverer of North America) brought whale trapping techniques to the Native Americans thus helping them survive.

Apparently, the lesson was an important one as Mr. Samleren relayed that two Norwegian tourists were thanked by a New York based tribal leader on a visit to a reservation. Hmmm…

Needless to say, this shop was a lot of fun to hang in. There was a ton of unfamiliar music and the prices were fairly good. My selections ranged in price from NOK 20 to NOK 130 ($4 to $24). Much better than any CD prices found. 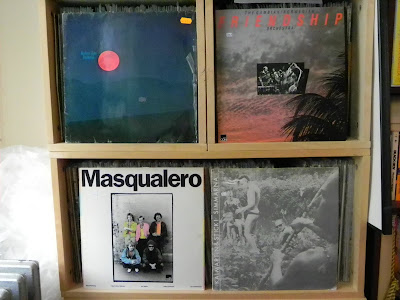 Oslo showed the most promise for records. The biggest, most cosmopolitan town in Norway, afterall. I had already done a bit of research and I knew that there was a shop dedicated to jazz and a good half dozen shops that had used records. We were limited on time so I was only able to hit a couple of them. 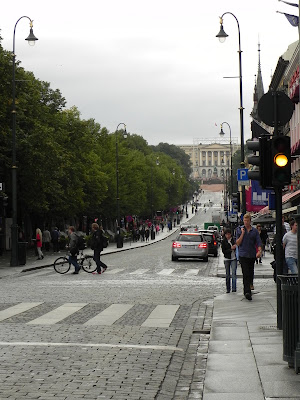 It took a minute to find Bare Jazz. We found the shop in a little alley about three blocks from our hotel on Karl Johans gate. Tucked behind a couple of boutiques and hipster coffee hangs, Bare Jazz has been the place to shop for jazz in Oslo for some time. 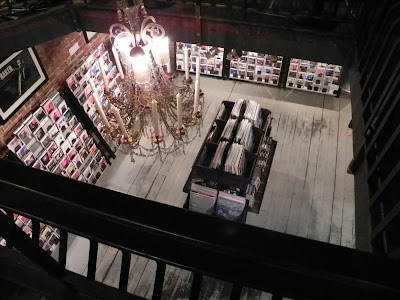 The prices! Oh, the prices! I didn’t see anything under NOK 198 ($38)! Amazing. I would be interested to know what the average income in Norway is. Maybe I don’t want to know…

Anyway… The store had a fabulous selection of jazz CDs from all over, especially of the Scandinavian. Vinyl selection was small and almost entirely new stock. There were a couple things that were original press in mint condition, some ECM and Stan Tracey’s Steam label.

Sadly, all I got at Bare Jazz was a strong Americano from the coffee bar upstairs. 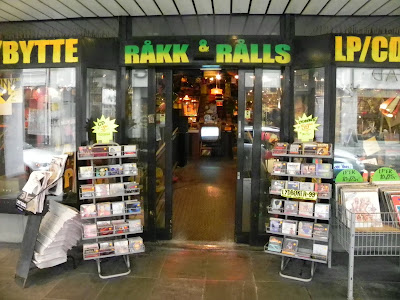 Just around the corner from Bare Jazz, we found Råkk og Rålls, Oslo’s largest used record store. The shop was less than a block to Karl Johans gate and about 50 meters from the Grand Hotel, right in the center of Oslo. Upon pleading, my dad gave me an hour. 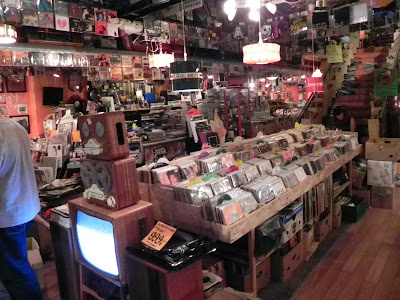 The shop was big. Three stories cluttered with ephemera and stacked with records, CDs and DVDs. I could have easily spent all day. RoR obviously specialized in the many varieties of rock. Stores like this could potentially have a gold mine of jazz/avant-garde stock at low prices. My favorite. 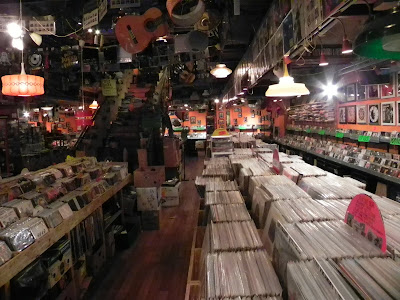 I had read some reviews of poor customer service. I didn’t need much help and was directed to the jazz section after inquiring. Maybe the directions were given a little apathetically. The jazz section was downstairs at the back of the store and separated into two groups: Traditional and Modern. I went through both sections as I kept seeing some infiltration of mods into the trad majority. No big deal. 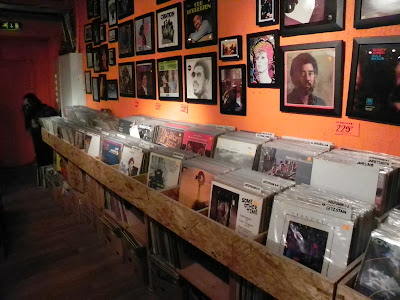 The selection was great. I was able to find two ECM releases that had never been reissued, another ODIN release and a weird out Polish recording. I had to cut myself off.

Another complaint I read seemed to have been about high prices. In the land of high prices this should be expected. I couldn’t vouch for the prices on rock and pop stuff but the jazz things that I found were less than I’d expect to pay for them in the States, whether on eBay or in a shop. I was a happy boy.

I really liked the shop and would have enjoyed spending more time but it wasn’t only my vacation. Onward to Vigeland Park! 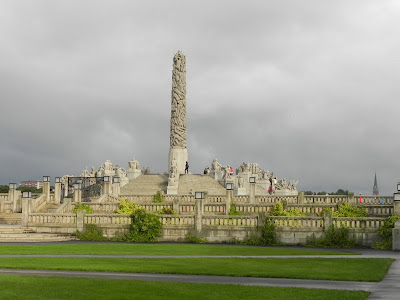 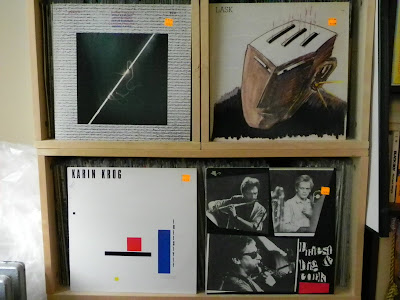 Kind of a bust. Stavanger was rainy and cold. We were convinced not to climb Preikestolen (the reason we had gone) and had plenty of time to waste. 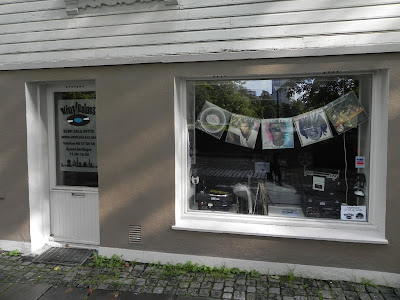 Where were you? We passed the store at least four times. It was never open. I had been on their website and the selection certainly looked interesting.

Being the only game in town, the store would definitely have made a sale and we would have been able to escape the rain for a little while. Oh well. Fit the pattern for Stavanger perfectly.