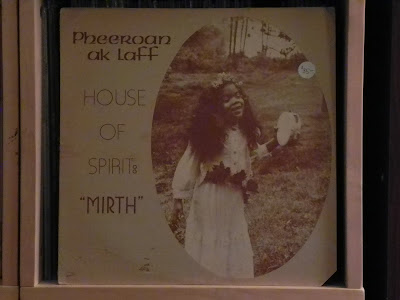 I was extremely happy to find this record at the Domino Record Shack in NOLA last month. I hadn’t heard it before but was familiar with ak Laff’s work with Henry Threadgill, Sonny Sharrock and Oliver Lake (who produced this record on his own label). I’m a big collector of the loft jazz guys. This was the first record to get thrown on the turntable when I got back. 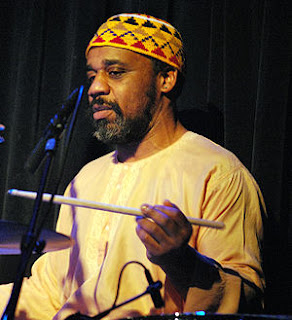 Percussionist Pheeroan ak Laff (Jan. 27, 1955) got his start performing in and around his hometown Detroit at a young age. He performed in a variety of musical settings including jazz, funk, gospel and R&B. In 1975, ak Laff moved to New Haven, Connecticut where he was introduced to the music of Wadada Leo Smith by reed player (now minister and Emory University professor) Dwight Andrews. He became a member of Smith’s New Dalta Ahkri and can be heard on the ensemble’s record Song Of Humanity (Kabell 3, 1976).

Through his work with Smith, ak Laff was introduced to Oliver Lake. Lake had already established himself as a mover in the world of progressive jazz as a founding member of the St. Louis based Black Artists Group and then relocating to New York City in the ‘70s to become fully immersed in the burgeoning loft/spiritual/Afro/avant-garde (take your pick) jazz scene. In 1977, Lake became a founding member of the World Saxophone Quartet alongside Hamiet Bluiett, David Murray and Julius Hemphill.

Ak Laff followed Lake back to New York where he became a member of Lake’s ensemble that included guitarist Michael Gregory Jackson. He appeared on recordings by both Lake and Jackson, along with one apiece from pianists Anthony Davis (another New Haven connection) and Amina Claudine Myers. He also appeared regularly at loft gigs, most notably at Ali’s Alley (his mentor Rashied Ali’s performance space) where he also lived when times were a little rough.

Lake released his first recording on his Passin’ Thru label in 1974. The record called, incidentally, Passin’ Thru (PT 4237), recorded on May 18, 1974 in Paris, featured a Lake solo saxophone concert with added prerecorded synth by Ivan Pequeno.

Ak Laff’s association with Lake proved fruitful as it allowed him to make his first recording under his own name, the solo percussion record House Of Spirit: “Mirth”. The record was recorded by Randy Alder at Blank Tapes Studio in NYC on February 6 and 13, 1979, with touch ups at S&S Studio by David Baker. 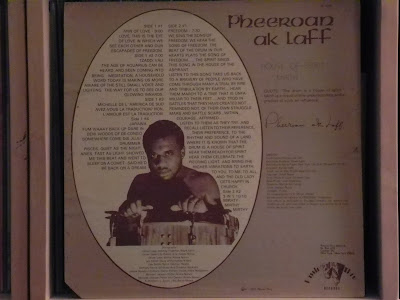 Though Mirth is a solo percussion record, ak Laff’s melodic sense shows up immediately. “Ayin Of Love” opens with a solemn whistled theme that sounds more Morricone than Moye. The overdubbed percussion follows with a catchy, sing-song chant.

This humanizing element is missing from many solo percussion recordings and makes this a particularly listenable record. With the Arabic title, tribal drumming, chanting, et al, there is an obvious tie to the Afro/spiritual jazz music scene that had established itself during the 1960s and was still prominent in the loft scene.

“Ayin” (Arabic and Hebrew for eye) features an off-kilter, quick duple meter backbeat as ak Laff layers percussion over the top. Using his kit, congas, bongos, tambourine and shakers, ak Laff’s wafting textures constantly phase in and out, much like the polyrhythmic drum music of Western Africa. There’s use of some phasing to get kind of a spacey effect, especially on the tambourine. The piece also seems to be in sections focusing on different percussion, beginning with hand drums then shakers/tambourine and finally the drum kit. The repetitive vocal chant is extremely effective in keeping the music tuneful.

There are two short percussion improvisations on the a-side, “Tzaddi Vau” and “Michelle Del ‘America De Sud’”. The track listing on the record jacket and the label are out of order, as long as the track lengths (which are also way off) are supposed to identify the tunes. At least I think this is the case. I’m going with my gut rather than the liners. Oh, indie jazz labels… 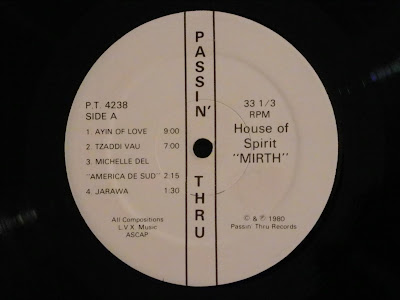 “Tzaddi Vau” is a spirited kit exploration with a lot of snare, floor tom and cymbal work. It sticks to a dancing 4/4 beat that allows ak Laff a lot of freedom to sound off with some of his most aggressive playing on the record. “Michelle” is a little more offbeat as ak Laff develops a slinky groove playing mostly on the rims of his drums before trying the different timbres he can create with his toms and snare while manipulating with his drum sticks against the skins. This is the last track on the a-side. Both of these are over far too soon.

The other “longer” track on the a-side is “Jarawa”. It starts with quiet focus on tom and floor tom rolls as ak Laff creates a simple melody between tuning of the drums. A single live track, his Eastern influenced chants accompany his drumming simultaneously. His melodicism is well displayed as the lower drums sing as much as his voice. Jarawa refers to a native black tribe that inhabited the Andamanese Islands in the Bay of Bengal, thus the Asian flavor. (I believe ak Laff’s chanting “jarawa” somewhere in there, which makes me think that is the “Jarawa” rather than “Michelle” as shown on the label.) 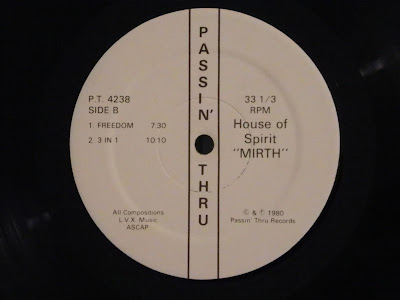 “Freedom” begins the b-side with a full out, traditional, gospel chorus. Ak Laff’s multi-tracked vocals are great. Shows his connection with the gospel and R&B traditions. Funky to boot. A gong smash breaks up the congregation for another kit based improvisation. Here he sticks to his toms and hi-hat for the most part, quietly at first but building momentum. Was that some swing I heard in there on the hi-hat? Think so. The volume and intensity mount as the full kit begins to be utilized. Towards the end comes the more clave inspired off beat. 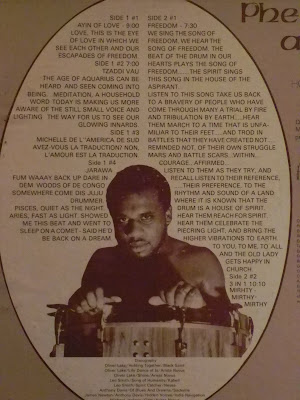 Ak Laff writes about “Freedom” and its meaning in the album notes. He wants the listener to remember the “bravery of people who have come through many a trial by fire and tribulation by earth.” Here he refers to the descendants of the African diaspora and, more specifically, in dedication to his cousin Douglas Jackson who had died in Vietnam. The record was meant as a celebration of the spirit of these people. Bringing us to the album title, which is explained thus: “the drum is a house of spirit” and mirth comes from “this understanding and product of such an influence.”

The final track is called “3 In 1” and is a funky, samba-esque march. The wood block accents are cool additions along with the offbeat bottle taps. This is a busy piece as he expands the trap kit with these small percussion elements and his vocal outbursts. There is an obvious 4/4 framework established by the loose hi-hat and kick drum. Ak Laff covers the full range of his instrument on “3 In 1,” playing all over the kit. The percussion quiets down with the hi-hat fading. Then ak Laff’s soulful vocals break over an overdubbed vocal harmony ostinato of “I’m just passing through…” There’s some very soulful vocal stuff in there. What a cool way to end the record, connecting with the listener with some vocals and a quiet nod to the label.

I like that ak Laff remains grounded during recording. He doesn’t try to flummox the listener with a bunch of crazy time signatures. The polyrhythmic build up is enough to keep attention and asses shaking. He does use some studio tricks but in order to add a human element to music rather than taking it over the top. His overdubbed vocals and percussion lend to more listenable recording for folks that would be familiar with more popular types of music like soul, gospel and blues. He really tries to tie in his African heritage with the African American musical tradition, which he pulls off without it seeming insincere.

I’ve heard that House Of Spirit: “Mirth” will be reissued in late September on the great Soul Jazz / Universal Sound reissue label. I would recommend picking it up.
Posted by Bret Sjerven at 9:02 PM