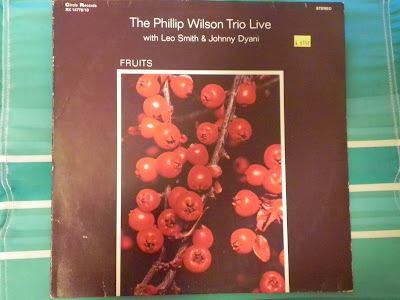 I’ll keep this tread of late ‘70s percussionist led sessions going for a minute. I originally read about this recording in a very complete book about South African ex-pat bassist Johnny Dyani, Mbizo by Lars Rasmussen. The book is a great collection of interviews, testimonials and remembrances of this tremendous musician. Anyhow… A number of interviewees mention Dyani’s incredible playing on Fruits, so the record was in the crosshairs. I managed to track Fruits down on a random browse at A1 Records in NYC. Not typically the best spot to find specific items but it happened to be in the Ws for $15. Home it went. 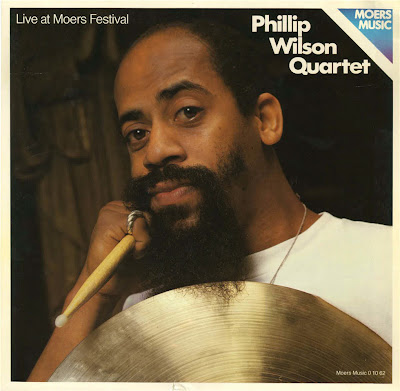 Percussionist Phillip Wilson was born in St. Louis, Missouri on September 8, 1941. His first foray into the world of professional music was alongside St. Louis based organist Sam Lazar on his album Playback from 1962. Upon moving to Chicago in the mid ‘60s, Wilson helped found the Association for the Advancement of Creative Musicians (AACM) and was enlisted in the initial lineup of the Roscoe Mitchell Quartet (which would soon become the Art Ensemble of Chicago).

In 1967, Wilson joined the Paul Butterfield Blues Band and went on to record three albums with the band for Elektra (The Resurrection of Pigboy Crabshaw, In My Own Dream and Keep On Moving). He was involved in the band’s performance at Woodstock where his and saxophonist Gene Dinwiddie’s “Love March” got its first performance. Shortly thereafter, Wilson and Dinwiddie started the group Full Moon alongside former Butterfield member Buzz Felton. The group released a self-titled recording on Douglas in 1972.

It was Wilson’s involvement with Braxton and saxophonists David Murray and Frank Lowe that helped generate the trio featured on Fruits. 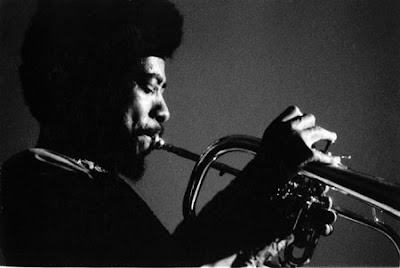 Wilson had known trumpeter Wadada Leo Smith since the inception of the AACM in 1967. The two began playing together regularly as members of the Anthony Braxton Quartet (the group also featured Dave Holland on bass) in 1976. Their first recording together was a major work by the composer/reed master, Creative Orchestra Music 1976 (Arista – AL 4080). Wilson and Smith would record the following year on a session led by Frank Lowe, Doctor Too Much (Kharma - PK-2).

David Murray had enlisted Wilson to play with his ensemble in June 1976. The two records that followed that year were recorded performances at two different loft spaces and in studio, Flowers for Albert (India Navigation – IN 1026) at Joe Lee Wilson’s Ladies’ Fort on the June 26th and Low Class Conspiracy (Adelphi – AD 5002) at Sam River’s Studio Rivbea on May 14 then June 29 at Blue Rock Studio. 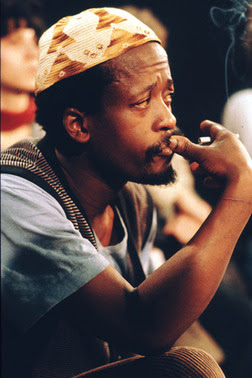 In January of 1978, Murray toured Europe with an ensemble that included cornet player Butch Morris, drummer George Brown and the South African ex-pat bassist Johnny Dyani. Dyani had been living in Europe since the mid-1960s when he and the rest of the Blue Notes jazz quintet went into self-exile. Since that time, Dyani had had many fruitful collaborations with former Blue Notes (drummer Louis Moholo, trumpeter Mongezi Feza and Chris McGregor and his Brotherhood of Breath), Turkish percussionist Okey Temiz and pianist Dollar Brand. Three different LPs were made of the Murray group while on tour. Last of the Hipman (Red Records – VPA 129) and Let the Music Take You (Marge – 04) were both recorded on the same night of Jan. 30th in Rouen, France. Interboogieology (Black Saint – BSR 0018) was recorded in early February in Milan, Italy with the addition of Marta Contreras on vocals.

Mr. Murray would have to weigh in on whether he recommended Dyani to Wilson. I haven’t been able to find out. I decided to let the degrees of separation do the talkin’.

Regardless… Wilson assembled the trio featuring Smith and Dyani for a performance at the Northsea Jazz Festival in Den Haag. The performance was on July 14, 1978. The record was produced by Rudolf Kreis for Circle Records, a small German label that recorded mostly progressive jazz from 1977 to the mid 1980s.

Fun fact – Dyani had just recorded with Louis Moholo on his Spirits Rejoice album for Ogun only a week previous. A track from that session was played at BYOV #2.

“Electricity” starts the set off at a clip, the drummer setting the pace. Dyani’s fast pizzicato plucks go up and down the fret board as Wilson’s light hi-hats keep the momentum. Smith’s strong vibrato-less tone fills the melodic role as the piece pushes on. The bass is high in the mix and Dyani takes advantage as he really wrestles tones out. The dialog between Smith and Dyani is intriguing. The call and response sections are of interest as the two develop an interesting dialog. 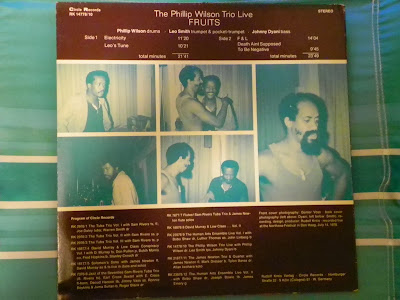 This is pure energy music with a free pulse allowing the musicians to really invest in their own sound. Smith keeps the energy up and texture dense with thick swathes of sound. The communication is good. Wilson plays the accompanist role until the middle where he commands a solo that starts at mid intensity and builds, rollicking along. Dyani returns with a solo letting the harmonics ring from his instrument with runs through the registers. It isn’t about intonation and melodicism as much as it is about sound creation, rhythm and texture.

Smith joins back with a blustery tone. The last couple minutes are interesting for the gear shifts, each soloist gets a chance to drive. The bass begins to walk, steering toward the conclusion, then slows with loud twangs as Smith ends with a long tone and Wilson’s cymbal splash. 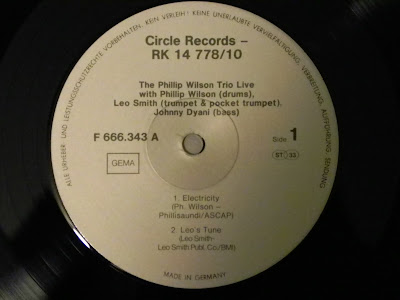 “Leo’s Tune” is a melody written by Smith. It has a more restrained and thoughtful nature. Smith’s long tones and haunting altissimo are contrasted with a minimal drum part and off beat low strums from the bass. The meditative quality and restraint create a nice balance to the firey “Electricity”.

The group begins to diverge as Smith takes the solo lead. Wilson is in his own world with very subtle hits, mild hints of swing on the hi-hats. Dyani throws in some of his fleet fingered tricks from time to time before he takes his solo. He remains focused on the various sounds that he can emit with his strumming before slowing into a blues-ish strolling line. Wilson begins his solo with rolling snare into an off kilter bounce. The high-pitched bass introduces the ostinato plucking and Smith’s return to the melody. This is a really lovely piece.

The b-side starts off with what is perhaps Dyani’s most intense performance on wax, Wilson’s “F & L”. He starts off with some incredibly nimble finger work and bent notes. Dyani is really the engine here as Smith plays a long tone melody and Wilson stays in the background until the main dancing melody comes in. Dyani’s muscles are flexing as he hints at a bass line but continues to deviate favoring his own fireworks.

Hip-hop heads should definitely look to this for some pretty nutty bass tones. Dyani’s unique sense of groove and physicality on the instrument are on full display. Wilson shows his command of time by bringing his solo down to bare essentials, quick resonant hits on this drum or that, slow builds, a cymbal hit… Dyani brings us back (who else?). Very, very cool piece. 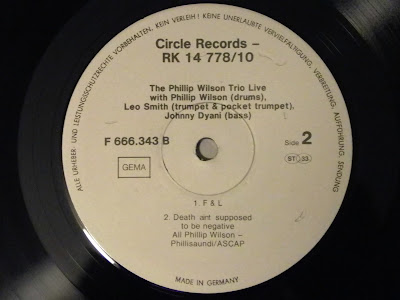 Wilson’s “Death Ain’t Supposed To Be Negative” closes out the disc. Wilson’s unaccompanied drums start off a mid pace groove. Dyani and Smith are quick to start up with minimal plucks and thoughtful bluesy blasts. Smith’s raw tone is especially nice here as he begins to pick up intensity into a gallop. The waltzy tempo set by Wilson dances along nicely as Dyani frames the piece with a descending line, his most harmonic playing on the disc. He also tries different rhythmic phrases on the line.

Smith and Dyani remain in the front of the mix. Smith’s poignant solo breaks off as Dyani comes in with his thrummed tones following the basic form, descending and descending. His bass hums. A very simple yet resonant (in more ways than one) statement. Wilson’s solo finds him a little busier as his snare and cymbals start to sing. He remains within the jazz lexicon throughout with flourishes of out stuff. Smith comes in plaintively. Very controlled end to this one.

Fruits is an interesting live recording that serves the sidemen more than the leader, mostly because of the recording volume. Maybe I’m just listening for him but I think that Dyani sounds the most involved. Overly busy? I wouldn’t say so. Perhaps a drummer with an opinion can tell me otherwise. Smith sounds great as usual. So maybe not an essential recording but a great one for fans of Dyani and Smith.

Both Wilson and Dyani’s stories are sad.

After another eight years of recording and touring, Dyani passed away on October 24, 1986 after a performance due to a throat hemorrhage. He was already in poor health with a diagnosis of Hepatitis B. He continued playing with his full intensity until the end.

Wilson continued to record and perform with a number of artists, including Bill Laswell, Elliott Sharp and Fab 5 Freddy (!). His regular gig was being the drummer in the various ensembles of Lester Bowie. On March 25, 1992, the drummer was murdered by Marvin Slater near his home in the East Village, New York City. Slater was arrested but never gave a reason for the murder.