This is my initial post on one of my favorite subjects and pastimes, record shopping. Wherever I go, I try to find and visit record stores. I love seeing different retail approaches, local listening trends, meeting fellow junkies, etc. These posts are posited in review of choice stores that I’ve managed to visit. 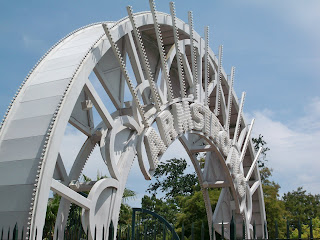 I’ve been down to New Orleans a handful of times over the past twelve years, only once pre-Katrina and at an early stage in my collecting. The first trip spent with parents and sightseeing, I only managed to run into Virgin (deceased) and the Louisiana Music Factory (still going strong).

Over the past four years, I’ve been lucky enough to attend distributor conventions in NOLA. I’ve managed to hit most of the city’s record stores during that time, when not schmoozing or eating.

Here’s a rundown of the spots that music collectors should definitely hit.

Here's one of my favorite jams to get you through. 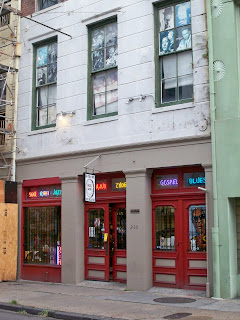 Easy enough. On the edge of Storyville in the French Quarter, LMF has been the authority on all things music in New Orleans since 1992. The store carries everything but specializes in music native to the Crescent City, namely jazz, soul, zydeco, gospel, blues and what have you.

Just three blocks from our convention’s hotel, LMF has typically been my first stop. The ground floor hold most of their stock on New Orleans based music and memorabilia. I spent a fair share of time downstairs as I was looking for reissues of the AFO label and some other oddities. Of the ten CDs that I was looking for, nine happened to be in stock. I was also able to snag a copy of Harold Battiste’s biography, Unfinished Blues. It was happy hunting. 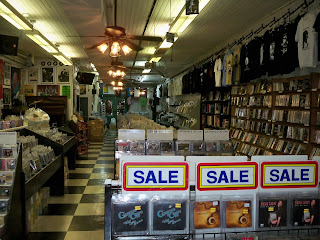 The vinyl and the remainder of their CD stock are located upstairs. Genres are split along a long wall with jazz being the first and probably largest category. They are arranged in a bookshelf kinda way. A little more difficult to surf through than bins, which they do have for new vinyl and recent arrivals. 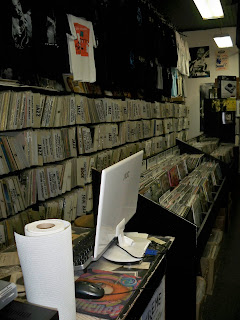 Records are pretty varied in price, style and condition. The prices are generally in the moderate range. There were some interesting looking releases, including some fun looking indie jazz labels from the late ‘70s and early ‘80s (need to dig in a bit more on the Discovery label). Could tell they were run off from radio stations.
Probably the first place WWOZ goes when they clean shop. The pieces themselves weren’t in the shape that I was looking for to pay the $15. Nice to know the records exist, though. 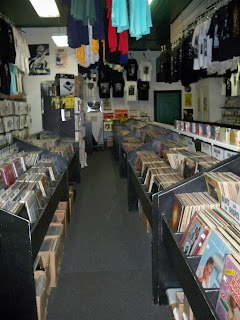 They also have a large, fun $3 bin. All styles. I did manage to find the 1968 Woody Herman Big Band’s Light My Fire on Cadet (corny but with some good drums – my man Donny Hathaway played organ on the follow up, Heavy Exposure).

As I mentioned, I was pretty focused on the CD buy and only took back a couple pieces of vinyl. The staff was extremely knowledgeable, especially in the NOLA centric stuff. Fun place to surf through and a must for any fan of New Orleans/Louisiana music. I was in the shop everyday that I was in town. 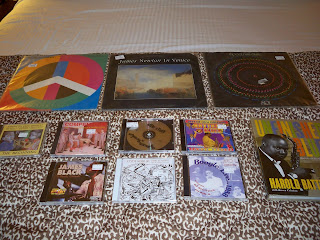 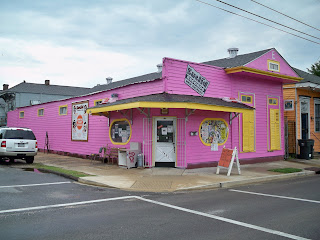 I had been looking forward to hitting this store since hearing about their opening last year. I’ve always made sure to check the Euclid guys out at the WFMU Record Fair in NYC. They have always carried a great, varied selection of jazz records.

The original Euclid has been a St. Louis institution for over twenty years and I’m sorry to say that I haven’t been able to visit yet. It has been rumored that they have over a million records all told. Urban legend or optimistic inventory? Regardless, they have a ton of records.

Psyched to see that they have a shop in NOLA, obviously. Not to mention they have their inventory online (kinda disheartened to find out that it was the combined inventory of both stores - not to worry, there was plenty to buy). 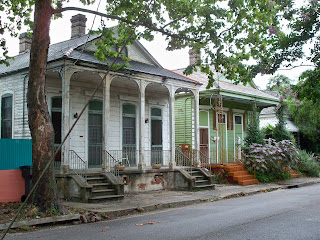 Euclid moved to the Bywater district north of the Quarter about a mile and a half. I made sure to run by on my early morning sweat bath/death march/jog.

Caught a cab on a post monsoon Saturday afternoon. Got to Euclid in about ten minutes with the driver fording through ravines of rainwater as high as the bumper. The store was located near the river levy where the city has been installing a river walk. Very cool neighborhood with some beautiful row houses.

I got there about two and was the only customer for most of the two or three hours I was there. Inventory was almost entirely vinyl with a wall of CDs in the back. Fine by me. 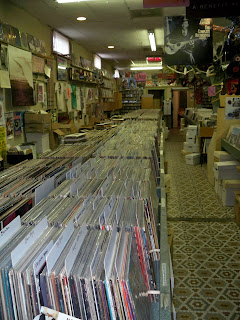 They have an excellent, large new arrival section. Love the mixed bins (typically pull stuff that I wouldn’t otherwise). Some new pressed vinyl in the mix, too. 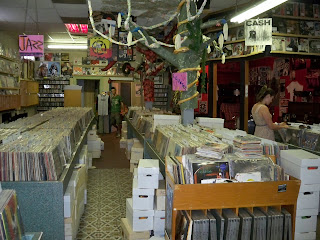 The layout was pretty straightforward. Soul/R&B, jazz, blues, vocalist (male & female), folk, rock, hip-hop/rap, world, reggae, etc. Jazz section was big and covered a lot of stuff. I went through everything and had to weed down through a stack about seven inches thick. Did manage to find some John and Beverly Martyn records that I have been looking for in a very well stocked folk section. 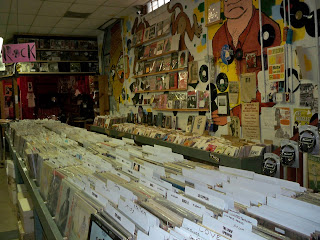 The vinyl condition ranged from good to excellent. Prices vary based on condition and rarity. I thought that the prices were typical of what most of these pieces should go for, some a bit low.

Staff was extremely cool. Definitely holler at James Weber, the proprietor. Very nice guy. He also gave me the recommendation for the next shop I visited, the Domino Sound Record Shack.

Vinyl collectors – this should be #1 on your list for NOLA. 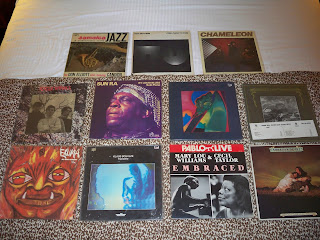 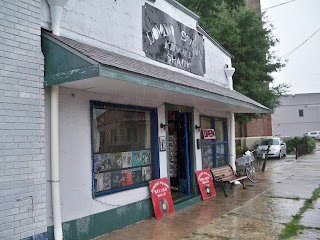 I originally came across Domino while searching for record shops on Yelp. It had a couple of very nice reviews. After hearing the nice review from Weber, I thought I should make the trip.

Domino has been open for nearly five years and seemed to be pretty healthy. The store was the only one in the neighborhood and caters to folks looking for more obscure titles, especially punk, reggae and world.

The store was located a bit north and west of the Quarter and took a five minute cab ride. 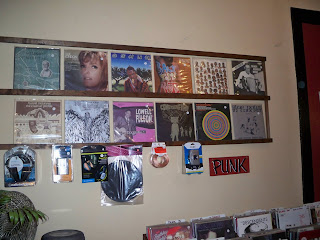 The store was a small one that was maybe 50/50 new to used vinyl, all mixed together. The selection was well rounded for a store that size. The sections were broken down into punk, rock, soul/R&B, jazz, mainly reissue world, avant-garde and a very large reggae section. This was the best store for reissue vinyl as the selection was large and very up to date. 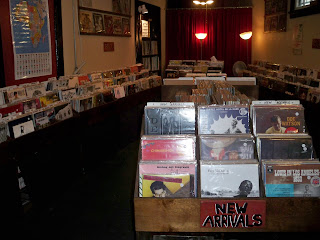 I was happy to find a rather large cache of out indie jazz stuff. A couple Ogun, Hat Hut and MPS pieces at reasonable prices. There was a Harold McKinney on Tribe Records on the wall but I don’t roll that deep. 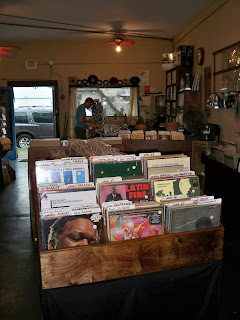 The owner was in the house and was very helpful. He was also nice enough to put up with my friend and me for an extra 40 minutes as we waited for a cab to pick us up. Time played into his hands as we continued to comb through the bins finding more to add to the bill. Turns out the store also had their own vinyl only record label with some nice looking blues, world and punk stuff (including The Ex + Tom Cora).

Good hang and well worth the trip. 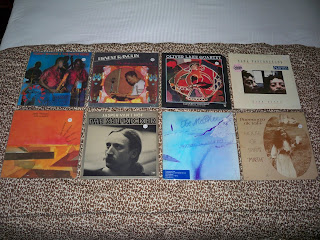 Full disclosure: I visited three other record stores while I was there. I won’t get nasty here and point these shops out but I will say that in a town that prides itself on its cultural/musical legacy these retailers need to get their shit together. Between the variables of no AC, terrible stock condition and overpricing (one store had CDs at nearly twice suggested retail), these stores are borderline horrible.

That said, I give an enthusiastic endorsement to all the three stores that I’ve mentioned above.
Posted by Bret Sjerven at 11:39 PM