Whew… Sorry for the delay. Got waylaid in New Orleans. More on that soon.

The second installment of BYOV was held at Barbés on July 12. We had a great crew and some interesting musical selections.

For those of you playing at home, here were our themes:

a) Acoustic guitar soloists. The suggestion was acoustic jazz guitarists but I thought I’d open it up. So who’s your fav finger-picker or nylon guitar strummer?

b) Great rhythm sections. Should have a good response here. I’ll only allow one Coltrane, Miles, or Messengers record. Get creative. More points for unusual combinations.

c) Musicians with faulty technique that sound fantastic or totally works for them. Cracked notes, singing out of tune, banging pianos with fists… Let’s hear your favorite flubs or bad technique.

I was surprised at the number of acoustic guitar selections we had. Maybe because it was listed first? Good to have heard the varying approaches, though. Had a few folks for the rhythm section and a handful of the “unorthodox technique.” Inversions of these two will probably come back around.

On with the show! 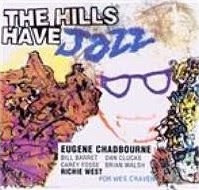 As a blindfold test, Richard presented a very unique take on jazz guitar tradition. No one guessed the player.

Of course, Chadbourne has been known as an agent provocateur in the world of rock, country, folk and everything else he sets his mind on. His most high profile groups were Shockabilly and Camper Van Beethoven, though he has made tons of records under his own name.

According to Richard, Chadbourne, being a fan of horror flicks, sent a copy of Shockabilly Baby to director Wes Craven, who actually got in touch with Chadbourne. Craven dug the music and invited Chadbourne to hang on the set of the movie Cursed. The director also lent Chadbourne his prized Gibson acoustic.

Tad Dameron’s “Good Bait” was one of the standouts on this following jazzy tribute (the title was a spoof of Craven’s The Hills Have Eyes). The track showcased a swinging yet discordantly, twangy Chadbourne along with foil electric guitarist Carey Fosse and tenor saxophonist Brian Walsh. The recording was a definite departure from what was generally accepted as a Chadbourne-ian. 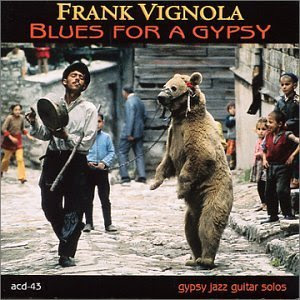 Vignola has been extremely well regarded as a player that can handle nearly any jazz style. On Blues for a Gypsy, he tackles the gypsy jazz reminiscent of Django Reinhardt. The CD came out on David Grisman’s Acoustic Disc label, a home for amazing, acoustic string players. Interesting to note that a lot of the old hippies adopted these acoustic folk, blues and folk forms later on (Jerry Garcia among them).

David mentioned Paul Brady’s astute comment that Django was a be-bop player. The quick eighth note and chromatic movement that was typical of Reinhardt’s playing has fit perfectly in the be-bop canon.

Vignola has carried on the tradition extremely well. I was amazed that the “gypsy” jazz style has remained so popular and studied for so long. Vignola’s solo take on the Miles Davis standard “Donna Lee” had the fleet fingered runs and in the pocket swing that Reinhardt made popular decades ago. This would be a more traditional acoustic guitar jazz setting. 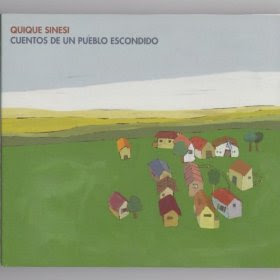 Eric brought in a lovely recording by the Argentinean folkloric guitarist Quique Sinesi. Sinesi has been around for some time collaborating with musicians like Dino Saluzzi, Paquito D’Rivera, Charlie Mariano and Joe Lovano.

“Dos Soles” was a solo feature on Sinesi’s Spanish 7-string acoustic guitar. He displayed a very percussive style with his use of the entire instrument, not only the strings.

Someone mentioned that his playing sounded much like that of Egberto Gismonti. “They are close on a map…” (Gismonti’s from Brazil).

A question asked about how his sound approximated Argentinean folkloric music. Jerome mentioned that there was a certain accent that was present that occurs frequently in Argentinean music. Eric, our resident Argentinean music aficionado, said that he heard the echoes of Candombe rhythm in Sinesi’s playing. 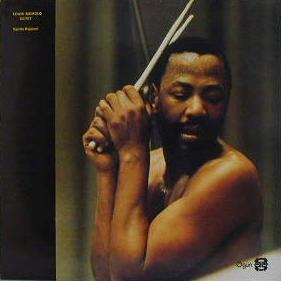 Energy! Whoof! Moholo has always been a force of nature. The South African expat made his initial impact in the European improv world as a member of the Blue Notes and then as the fire-y drummer in Chris McGregor’s Brotherhood of Breath. He then went on to establish a reputation as a percussive whirlwind behind a number of avant-garde masters including Roswell Rudd, Steve Lacy, Kees Hazevoet and Elton Dean.

Spirits Rejoice! was his first recording as a leader and he presented an octet of outstanding players, including trumpeter Kenny Wheeler and trombonist Radu Malfatti. The rhythm section really stood out as it included the amazing British pianist Keith Tippett and South African bassists Harry Miller and Johnny Dyani. “Khanya…” featured an amazing solo from the renowned Evan Parker. Like much of the South African inspired progressive music, the performance straddled spiritual and march. The township meets free jazz. Could easily have been a pummeling free jazz blowout but was rather an animated celebration. Love this.

With this explorative selection, I broached the topic of audacity in performance. The willingness to push the limit of an idea can be either polarizing or genius depending on the context. There are definitely situations where an artist can push the bullshit level too high but there have been situations where an artist shouldn’t fiddle with so many different “ideas” but further develop one. Tippett’s playing has provided many examples of this. Check out his solo recording, Lonely Raindancer. 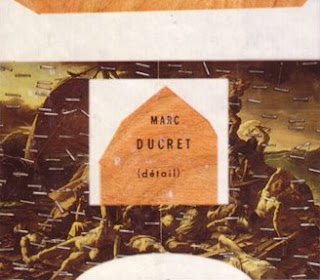 Jerome brought a great recording by the ever-intriguing guitarist Marc Ducret. Ducret has been a celebrated figure in the progressive jazz/improv scene for years. He’s probably most well known for his playing in a number of ensembles led by NY Downtown legend/saxophonist Tim Berne.

Ducret’s output has been incredibly varied. He has tended to perform in groups that blend elements of jazz and progressive rock. He has also made a number of solo recordings, on both electric and acoustic guitar.

(Detail) was released in 1997 and was an entirely acoustic guitar solo recording. “Le Relief” was chosen to show Ducret’s command of his instrument (a 12 string guitar here) and use of space. He was able to use the natural resonance of the guitar wonderfully. Jerome commented on Ducret’s ability to transpose his technique equally on acoustic and electric guitars, maintaining his unique identity. 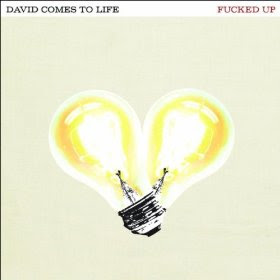 So if you haven’t read Pitchfork over the past couple years, Fucked Up has been mopping up critical attention in the indie rock world. Our man Adam Schatz described the band aptly as “a dynamic rock band with hardcore singing.” The singing was the “unorthodox” element here.

Evidently, the group has been prone to concept albums. David Comes To Life has continued the trend, a rock opera about a light bulb factory worker.

“The Other Shoe” showcased vocalist Pink Eye’s gritty, throaty voice over a lush instrumental nearly progressive rock backdrop. The contradictory styles made the track extremely interesting to listen to. Typically, these over driven vocals don’t hold my interest but they seemed so well integrated and honest, I was won over. Can’t argue that there wasn’t some talent/technique involved there.

Adam has been smitten. He had seen the band recently and was impressed by the band's attitude. The group was fully committed to the music and also reaching listeners. Pink Eye managed to wind his way through the crowd to the upper tier seating, creating a very communal vibe. Adam even got a sweaty bear hug.

“It could be played louder…” 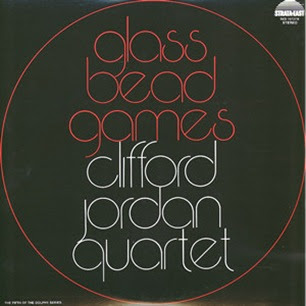 Critics and their blindfold tests… Well, Ted has been a carrier of the flame for some time.

Ted said that he wanted to avoid the “philosophical conundrum” that could arise while discussing the ingredients or purpose of a great rhythm section. Should it support the soloist? Provide brilliant soloists? Play straight or around the beat…? There were so many facets that could be explored and argued.

So… We got an example of an excellent, swinging jazz rhythm section. One that “played in cohesion and with higher functionality.”

I have to admit that I was trying to nab the saxophonist while listening. Extremely fluid tenor playing, very contemporary. The rhythm section was extremely solid. The production on the record sounded like the “polished” sound of the 1980s. Really, it could have been any time from the ‘70s to ‘90s.

The drummer was the first to be guessed correctly. The tight playing with impeccable snare rolls had to be Billy Higgins.

No… But the right rhythm section. Therefore, the remaining players were pianist Cedar Walton and bassist Sam Jones.

Ted went on to say that Higgins was his favorite jazz musician to observe because of his ability to adapt and project his sound in any situation.

There were a number of surprised folks when we found out it was Clifford and recorded in 1973. Including me and I owned the damn thing! 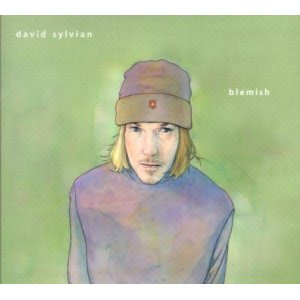 Sylvian has been at the forefront of avant-rock for some time. His early recordings with the band Japan have been eclipsed by his amazing solo recordings, which have spotlighted some of the world’s most unique musicians as collaborators.

“The Good Son” featured one of the last performances of the improv god Derek Bailey. Bailey had developed his own language of guitar playing over a 50-year career while collaborating with nearly every creative musician around the planet. Sound artist Fennesz probably added some reverb and effects to the material, as well.

Bailey’s knotty, brittle guitar was the only accompaniment to Sylvian’s dark, Sprechstimme-esque lyrics. The eerie track felt as if both musicians might have recorded separately because they seemingly go in their own directions. Simon posited that it would have been difficult task either way, as Sylvian would have had to try to keep his even cadence to Bailey’s seemingly impromptu and free accompaniment. 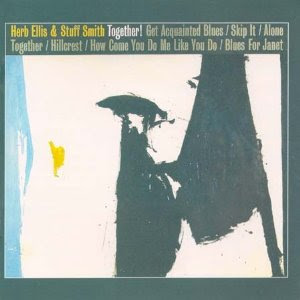 Matt presented this reunion jam that was produced by John Hammond for Epic in 1963. Guitarist Herb Ellis and violinist Stuff Smith had played together previously alongside Ella Fitzgerald.

Both musicians had been around for some time and represented two generations of the jazz tradition. Smith was a pre-be-bop violinist that had spent time in the territory bands of the ‘20s and ‘30s. Ellis was a be-bop guitarist that was most well known for his stint with the Oscar Peterson Trio.

“Get Acquainted Blues” was a feature for Ellis’s bop runs on guitar and the very swinging violin of Smith. Very much a throw back to both musicians’ respective earlier styles.

Okay. Wasn’t able to find an audio sample of this one, unfortunately. Sorry. Time to do some digging, huh? 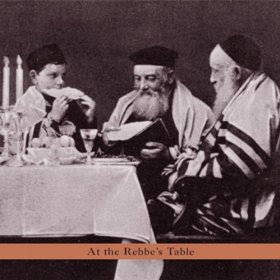 Damien brought this great duo between guitarists Tim Sparks and Marc Ribot. Sparks has been recognized as one of the best acoustic specialists of his generation covering the stylistic gamut between acoustic blues, jazz, world and jazz.

Sparks duo partner on “Beautiful City” was the wide-ranging guitar stylist Marc Ribot. Ribot has been a feature in the NY Downtown jazz/improv scene for many years along with being a first call sideman for musicians as diverse as Tom Waits and Elvis Costello.

The song itself was a Jewish Yemeni tune. Both guitarists played acoustic. The minor, Middle Eastern flavor would eventually break towards the twangy blues (most certainly Ribot). Very cool piece that showed a very engaging dialog between two virtuoso, complimentary musicians. 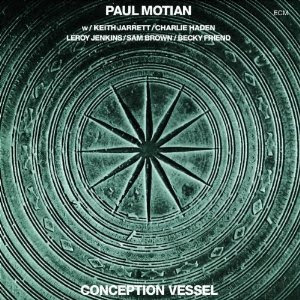 I finally got to exercise my Sam Brown addiction. Conception Vessel was one of my earliest ECM purchases and definitely my first recording of Paul Motian. CV was Motian’s first recording as a leader and featured his pals Keith Jarrett and Charlie Haden in a number of spare but grabbing compositions.

Brown’s playing was the main attraction on “Georgian Bay” as his acoustic guitar rings with harp like sweeps between the heavy bass of Haden and the meandering percussion of the leader. Top shelf stuff.

I’ve been tracking down Brown’s recordings for some time. Love to get more info on him. Ted recommended talking to Motian. I’ll try. Any other suggestions?
Posted by Bret Sjerven at 10:13 PM