In July, I took a trip to my old stomping grounds of Kansas City to visit my kith and kin.

Growing up in the suburbs of KC meant that I had access to a number of fantastic sources for my burgeoning record addiction. Two legendary shops still cast large shadows over the present vinyl landscape: Recycled Sounds and The Music Exchange.

Both of these stores were based in Midtown’s Westport district, the oldest part of KC and probably the longest lasting “young and hip district.” I began to frequent both shops as a teenager believing that I could harness the power of hip-hop DJ stardom through a random assortment of LPs. There was no one to tell me otherwise, of course, so I built up a small (and admittedly weak) collection of cheapo discs.

Recycled Sounds was the home of indie rock in KC. The store was opened in the late 1980s by husband and wife partners, Kurt von Schlemmer and Annie Winter. The store was in the forefront of what was hip in the Kansas City area and was host to a ton of excellent instore performances (I recall two during my hip-hop days – the newly christened X-ecutioners featuring Rob Swift, Roc Raida (RIP) and Total Eclipse and Mixmaster Mike as part of the 1998 Beastie Boys / A Tribe Called Quest tour). The store closed in 2006 due to Winter’s health issues. (She eventually passed away in 2009). This was also the first place to accept a résumé from yours truly.

The Music Exchange was not as hip perhaps, but more well rounded. This huge store was where I really started collecting. The original location was on Westport Road just east of Broadway. Owners Ron and Nancy Rooks moved from Wichita to open the store in 1979. The store moved to a huge location on 4200 Broadway just south of the KC coffee landmark, the Broadway Café. After a hard time of it, the store closed and reopened in the River Bottoms of KC before Ron passed away in 2006 sealing the fate of the Music Exchange.

After the unfortunate demise of these two stalwarts and the death of the Pennylane/Streetside franchise (where I made my retail debut), there weren’t many options for record perusal in the KC metro area.

Over the past five to six years, the vinyl market in KC has expanded. There have been a number of store openings in the City proper and in the neighboring suburbs.

Here I’ve provided a rundown of the recent additions along with a long-standing gem just a bit out of town. Go get some wax and some BBQ. 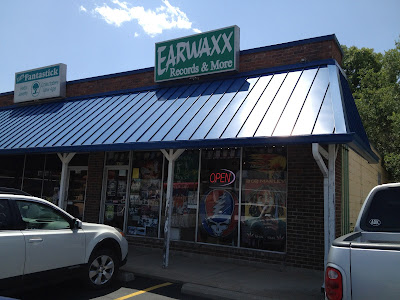 I arrived at the Kansas City International airport around noon on July 18th. The weather was a balmy 105 degrees with high humidity. Good reason to be indoors in the air conditioning. 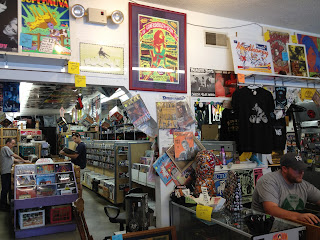 My sister was the unfortunate soul that had to pick me up ‘cause I intended on hitting the first shop immediately.

Earwaxx Records happened to be located between the airport and Kansas City. The shop is in Gladstone north of the City and is surrounded by what seemed to be an overabundance of used car dealerships and tattoo parlors.

We found the shop located within a short strip mall. The location allowed for a store of a good size. The front of store held what many used shops tend to gather: collectable t-shirts and action figures. The real goods were in the next larger room.

There was a long array of new arrivals to peruse. There seemed to be a very good mix of genre and obscurity.

Of course my main objective was the jazz selection, which turned out to be rather large. My search therein found a wide variety of independent labels mainly from the Midwest and East Coast. Many of the records that I came across I had never seen before and they were in good condition. I was willing to make a number of  “purchases of chance” (a turntable platter roulette, so to speak) based on the very reasonable price point.

The soul/R&B section was a bit smaller and I shopped a bit through the rock selection, which was the shop’s apparent specialty. Decided to keep my stay a bit brief for my sister’s sake.

The staff was helpful when approached. They even looked cute in their matching t-shirt uniforms. Actually, I should have picked one up. See you at Christmas.

Questions were answered and hands were held to direct me to a listening station. 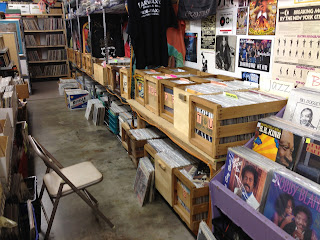 The condition of the records varied a little but I think the prices were representative of condition in nearly every case.

I felt that I came away with a strong collection of discs from Earwaxx. The breakdown is below:

It turned out that Earwaxx was opened in May 2008. Strange that I hadn’t managed to make it up there until this trip. I’ll make a point of getting there as frequently as I can from here on out.

Earwaxx proved to be a great new spot for finding a wide variety of LPs. I was very happy with the selection and condition overall. It happened to be a bit out of the way but that’s how it goes in KC. 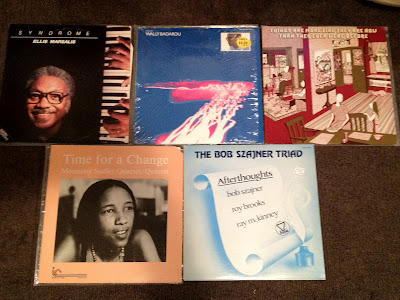 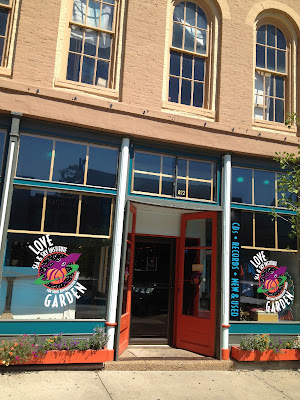 On Friday, I recruited my father (he would say forced) to drive me down to a scorching Lawrence, Kansas so that I could visit a former haunt of my high school and college days, the Love Garden.

Every great college town should have a great independent record store. The Love Garden has reigned supreme in Lawrence and (in truth) the rest of Kansas as the best music shop since 1990. 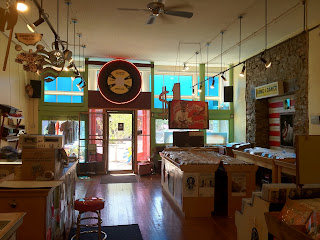 I began visiting the shop when I was in high school. Like Recycled Sounds, Love Garden was a great place to find independent rock and hip-hop on CD and vinyl as Lawrence has always been a hub for touring artists and home to a few greats, too (Get Up Kids, what!?!).

For years, the store had resided upstairs at 936 Massachusetts before it moved to its current location at 822 Massachusetts, just a bit farther north.

While I miss the old record cover tiled stairwell of the old location, the new street side location certainly has served the store well, increasing foot traffic into the shop. The new space was certainly roomy with a large vaulted ceiling and one long sales place. The entrance of the store held the 45s and used stereo equipment offered for sale. Immediately behind was their new vinyl selection that held a ton of recent and reissued LPs.

They had definitely scaled back the amount of records since my last trip, though the store has remained very well curated.

The jazz selection was much smaller than it had been formerly but it did hold a few winners. Most of the jazz seemed to be a few decades older than what I typically look for.

The most intriguing section was the alternative with a fair share of punk, new wave, goth and experimental titles to puzzle over. I took some time at the listening station to go through a handful of the unknown but more interesting looking titles. Condition was generally good with a decent to generous grading system marked on each disc. Worth taking a gander at the disc.

Prices were low to average on all the discs. Some of the pieces I found wouldn’t have been found for double the price in New York shops.

I did find myself going through their dollar selection as most of the pieces seemed to be in very good condition. Got a handful of 1980s jazz titles that I had been passing over for a while because of condition issues in other shops. These were pristine and the cheapest I’ve found them. So ha! 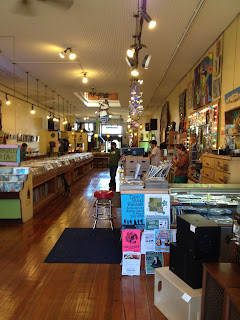 The shop also maintains one of the friendlier staffs in the area. Maybe it is that healthy country lifestyle those folks have in Lawrence. Though, I do remember the early days when the staff used to be a little imposing, a little “too cool” for a young music twerp like myself.

The Love Garden has remained a great shop and an important stop in Lawrence, besides stocking up on Jayhawks gear, of course.

There was a 30-minute car trip involved but it ultimately led to reward. 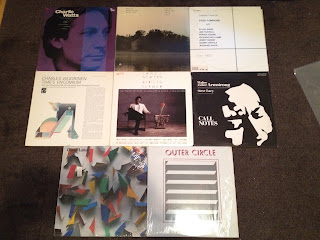 The latest addition to the KC record store lineup has been Vinyl Renaissance on 39th Street. This location was opened in April of 2011. 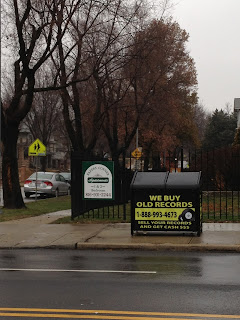 The original location of Vinyl Renaissance was opened a few years earlier at 10922 Shawnee Mission Parkway in Shawnee, Kansas. I have visited this shop a couple times. They had a decent selection but were kind of heavy at the price point. I’ve already visited this newer Missouri location a half dozen times or so. The prices have hovered around the medium range but have been steadily getting higher.

The store has been the best stocked shop in Kansas City for some time, though the stock doesn’t turn over very frequently. They do happen to have a very aggressive buying campaign as you can see on street corners around the city.

The shop’s central location has made it the first stop shop in town. They have continued to order new vinyl and CDs making it the last store to carry these in the City. Kind of strange, really.

Their used record selection covered the lion share of the space. There was a large jazz and blues section along with a larger rock and soul section. Alongside their new additions, there were two rarity sections: one for jazz and one for rock/pop. 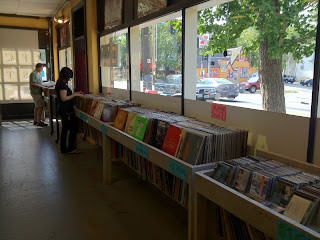 The store’s business plan has seemed to go after serious collectors rather than bang for your buck buyers. The jazz choices seemed to be priced at the higher end of what I’d be willing to spend for them. I only managed to take a couple pieces home. It didn’t help that there wasn’t a listening station to try to hear if some of the higher priced items might be worth the financial risk. 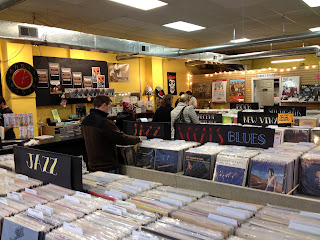 The staff was nice when approached. Talkative about the local record scene when asked. I know that at the store’s inception, many of the principle staff members came from the recently closed Streetside location in Westport. Happy that they found a home.

Here’s what I got: 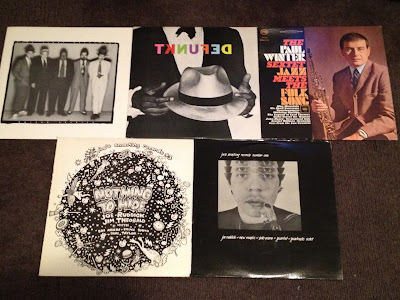 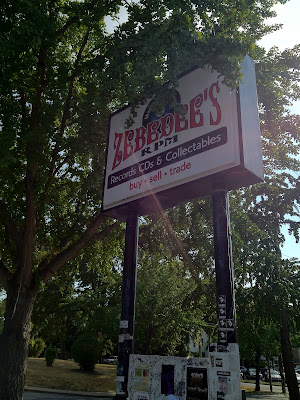 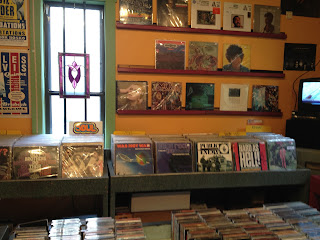 This shop opened up shortly after the Music Exchange shut its doors. A number of former Exchange staffers were able to work at Zebedee's for a time.

The store itself has been located in a funky old home off 39th Street. There they set up a small alcove for the register in the foyer while the records and CDs are in what must have been either the dining room or living room areas.

Everything in the store was used, which was totally fine since that was all I was looking for.

The stores selection wasn’t great for what I was looking for and there were definitely quality issues.

Of all the stores, Zebedee’s was certainly the most active in the way of clientele. The staff was actively engaged with a number of visitors and went out of their way to talk to me about what I was looking for, went to look for it upstairs and, when they couldn’t find the title, took down my name to inform me if it ever came in. Good business. 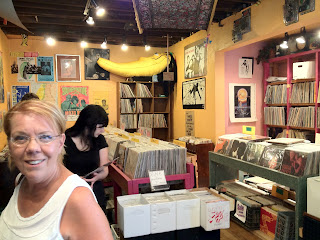 I have gone to Zebedee’s and picked up a handful of records in the past. This trip proved fruitless but I’m still happy to peruse their stacks as long as they stay as attentive and friendly to the customers.