Don’t know about you but I refer to All Music Guide all the time. I’m well aware that with so many recordings coming out it is extremely difficult to get editorial content on every record whether new or old. I’ll try to fill in some cracks with these little reviews. Well… Not so little. 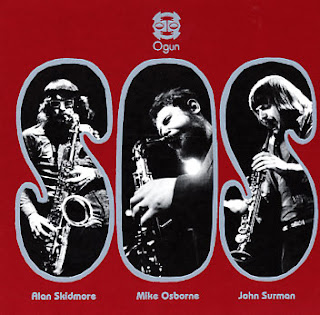 A couple weeks ago, BYOV listened to a Barre Phillips recording called Mountainscapes released by ECM in 1976. Comments were made regarding the use of synthesizers in the music and how they enhanced the performance rather than cheesed it up. This was certainly not the gimmicky, noodle-y nonsense that pervaded during the 1970s.

There were many synth practitioners and innovators of note during the time period (Roger Powell, anyone?) but only a few real masters in the improvised music settings. Sun Ra, Herbie Hancock, Dr. Patrick Gleeson, and Joe Zawinul all immediately sprung to my mind. These sonic experimenters adopted the technology very early and advanced its use so far that their names have become synonymous with synthesizers (making their returns to acoustic instruments monumental occasions in some cases).

Another synth disciple was featured on Mountainscapes, British reed player John Surman. Surman had been known primarily for his virtuosic talents on baritone and soprano sax, bass clarinet, and various recorders. He had garnered acclaim initially as a soloist in the Mike Westbrook Concert Band, a progressive large ensemble that was a breeding group for the British avant-garde. Surman released a handful of ensemble recordings on DERAM before he really broke out with The Trio – the popular ensemble that featured the American expat rhythm section of bassist Barre Phillips and drummer Stu Martin (definitely check out their two records on Dawn). 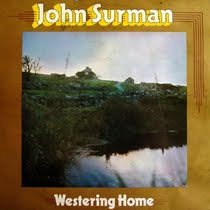 Surman’s first foray with synths and overdubbing came in September 1972 on his solo recording, Westering Home (Island, HELP 10). Surman played all instruments (baritone and soprano sax, bass clarinet, piano, recorders, synths) and, with the help of overdubbing, made an extremely personal and introspective work that stands apart from his free blowing earlier material. 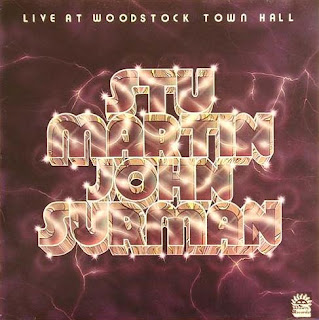 About a year after recording the 1973 Antilles release Morning Glory (a more jazz/rock fusion record featuring Terje Rypdal), Surman travelled to the US and recorded a duo performance with his former drummer from the Trio and fellow synth experimenter Martin. The music made on Live at Woodstock Town Hall (Dawn, DNLS 3072) was recorded in the Spring of 1974 and had a more driving, unhinged feel than the previous solo record. Added drums seem to have that effect. Dark, pulsating synths and distorted soprano sax were the call of the day making this a much more aggressive and experimental record. One tune was even anointed “Master of Disaster.” Go figure.

Okay, okay… S.O.S. The members of the group were not strangers when they coalesced. Alan Skidmore, Mike Osborne, and Surman (acronym S.O.S. – duh…) had played together in numerous situations, most notably with the Mike Westbrook Concert Band as far back as 1962. The mid to late ‘60s saw collaborations between the saxophonists on records under each other’s leadership and in the Chris McGregor Brotherhood of Breath (more on that very soon). 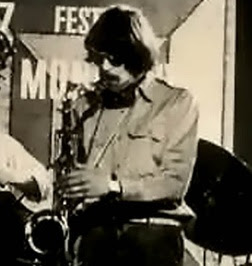 Skidmore and Osborne came with high pedigrees, too. Skidmore was an award winning British tenor player who had fruitful journeys alongside British blues artists John Mayall, Georgie Fame, and Alexis Korner along with leading ensembles performing and recording his own Coltrane inspired progressive jazz. Osborne was known for his aggressive alto playing and his very close association with the progressive South African expats, most notably bassist Harry Miller and drummer Louis Moholo. 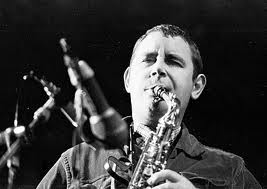 S.O.S. originally came together in April 1973. The group was the first improvising saxophone ensemble, beating both ROVA and World Saxophone Ensemble to the punch. Their first live performance was in Brussels that October and was followed by a month long tour of Italy. Over the next year, S.O.S. premiered in London at the 100 Club (April 1974), appeared on BBC Radio, and performed in concert at the Queen Elizabeth Hall. The group’s major coup occurred when they were commissioned to write music for American choreographer Carolyn Carlson for her “Sablier Prison” ballet in June 1974 at the Paris Opéra.

It took nearly a year and a half before the group decided to record. The decision was made while on tour in Scotland in November 1974. The recording would come out on Ogun Records, the then young London based label created by Harry Miller and his wife Hazel Miller. Osborne had already recorded a trio session for Ogun in 1974 that featured Miller and Moholo (Border Crossing, OG 300).

Right after the New Year, Surman jumped into Griffout Studios with label producer and engineer Keith Beal. The sessions on January 2 and 3 laid down much of the electronic instrumentation featured on the recording. The trio recorded together at Saturn Studios in Worthing, England from February 9 to 11 with Dave Ruffell as engineer. All the additional instruments were added during these sessions

Enough of the damn history lesson! What the hell does it sound like?

The proclamatory “Country Dance” opens the record with everyone on their sax: Skidmore on tenor, Osborne on alto, and Surman on soprano. The tune sounds like a medieval folk fanfare followed by a jig. Sorta like herald trumpets announcing the approach of royalty followed by a renaissance fair barn dance throw down. There was definitely some interest in early Anglo Saxon music, especially from Surman, who recorded a fair bit of this type of thing later on. The “medieval” aspect of the music seems due to the musician’s use of early polyphonic techniques, most obviously counterpoint and hocketing. There are builds and breakdowns that allow for all three to solo before they join together for a final statement of the theme.

A low, dark electronic hum and arpeggiating synth lead into “Wherever I Am.” Kind of has the Nintendo evil castle vibe (In the best way). Haunting and tense for the first couple moments until the synths fade and a Surman keyboard ostinato takes over while Skidmore plays a skittering but effective drum set. Osborne lets fly with some off the cuff, high-pitched alto work. The sax is the real highlight here. Osborne rides freely over what has become a modal, fusion tune with bits and pieces of ring-modulated keyboards wafting by. Insert corny bird through the clouds imagery. Listen below.

“Chordary” features the horns introducing the theme together with Surman on bass clarinet. Slow paced and slightly sinister. This is a harmonic gem as the saxes anchor the melody while Surman kinda plays around it, creating tension and release with his loose approach. There are some overdubbed bells that must intended to give a “mystical” vibe. ‘70s pretensions but I’m buying. About two thirds through, the baritone sax makes its first appearance. One of my favorite instrumental voices - Surman’s bari. He has a very human sound, especially in higher registers. The track fades on the bari.

Surman leads with a bass clarinet bass line on “Where’s Junior.” Osborne and Skidmore play a heroic, ascending unison melody until Osborne joins Surman in rhythmic and harmonic duty to allow Skidmore a tenor feature. The piece is put together simply with a basic rhythmic sequence that is passed and/or augmented by whomever isn’t soloing. Skidmore’s solo is a beaut, a bouncing, sheets of sound monster, followed by Osborne until they regroup on the sequence to finish. Very effective. Listen below.

“Cycle Motion” is a winding composition with cyclonic flourishes as horns break off from an ascending pattern that speeds and slows. Alto, tenor, and bass clarinet. The piece’s harmonic structure is a little more interesting. The horns play tight on the repeating pattern but make intriguing tones on the more wailing sections as they play a rich, descending line. The horns end up screaming and fading while a Moog washes in with a Bach-fugue-played-by-Caribbean-steel-band flavor.

“Ist” starts off with the horns in unison while a low electric keyboard drones ominously underneath. The horns then break off into a stately melody while bass clarinet adds a pedal point. The piece begins to speed up as the saxes pick up the pace and the bass clarinet the bass part. Skidmore then takes a flying solo that ranges over the breadth of the horn until he restates the theme thus signaling Osborne to jump in. The altoist’s shrill tone is very reminiscent of Jackie McLean on this solo. The group comes together for a poignant ending and melody statement over bass clarinet pedal.

“Calypso” starts out with a sequencer building a tense repetitive theme with a hint of Moog bass. I really love this stuff. Sounds like a nature program soundtrack from the ‘70s. Slow-mo of a chameleon catching a mayfly… A shrill pattern develops. The horns start blowing over with a delay and some distortion for a lonely, decaying effect. They finally come together for a very harmonically tart and slow melody. Individually, they keep throwing in stabs that fade into the either. Surman takes an eerie solo on bass clarinet developing into nuttiness including some screams and howls. This is definitely the piece de resistance of the album. Listen below.

Overall, the album is kind of a hodge podge. There are some very rehearsed but flexible horn arrangements that allow for improvisation. The electronic bits are never too heavy handed, maybe a bit dated but seem to fit here (funny how I kept coming back to Vangelis on this listen, while this record predates his fantastically synthetic film scoring). I understand that S.O.S. performances prior to recording were heavy-duty affairs, as it was full out woodwind, thick ensemble pieces. The electronics add space to the compositions and an almost cinematic kind of ambience. I really enjoy the record not as a technical masterpiece but more as an aesthetic experiment.

So maybe this isn’t on par with other improv based records that feature synths and electronics. The use of synths here was not to define but rather to enhance the sound of the recording. The synths and effects aren’t even used on every track. This was certainly early in Surman’s electronic experiments.

Where are they now? S.O.S. broke up soon after the recording. Osborne was already showing signs of fatigue from a fast lifestyle and mental illness that would soon be diagnosed as paranoid schizophrenic. His playing career ended in 1982. Osborne passed away on September 19, 2007 of lung cancer. Skidmore continued his career playing on pop records (Walker Brothers, Kate Bush, etc.) and his own more progressive jazz projects. He later began performing with African musicians. Surman became one of ECM’s most prolific artists and continues to tour heavily. His further experiments with synthesizers and overdubbing are very well documented.

CD reissue by Ogun was released in 2006. Still available.
Posted by Bret Sjerven at 10:35 PM